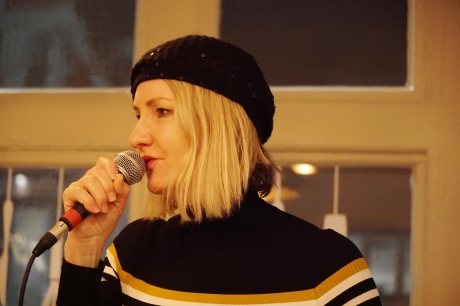 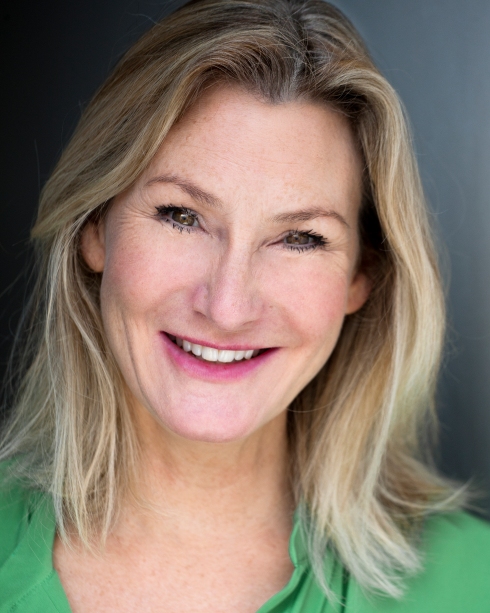 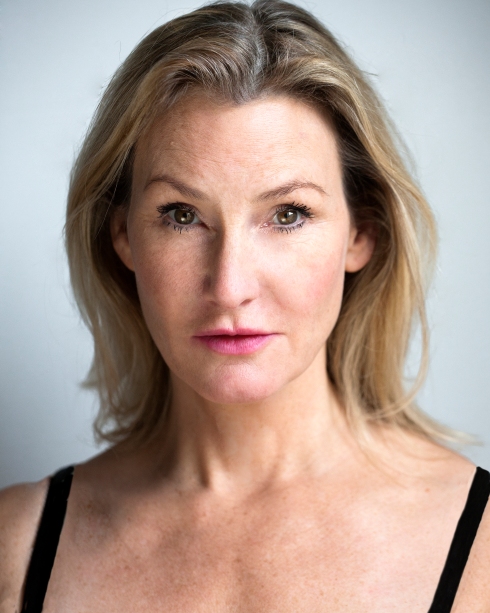 Samples of my singing can be heard on http://www.soundcloud.com/clairemalcomson To contact me please email clairemalcomson1@gmail.com or call 07970 219 140.

2018 A new theatre venture for me. Sex Is Another Language a one woman show about Elizabeth Taylor, whom I play, opened on July 5th. It is a rip roaring success…
Five stars:
“Sex is Another Language” by Tony Earnshaw
Reviewed at Leith Hill Place.

“Sex is Another Language”, a new play by Tony Earnshaw, brings the late Elizabeth Taylor vividly to life. Glorying in her sexual magnetism, unashamedly hedonistic, she commands the stage, speaking of her loves, her friendships, her Hollywood career, her dreams and her disappointments. And yet this is not a portrait of a stereotypical diva. I left the performance at Leith Hill Place feeling that I had been introduced to a complex, warm human being as well as an intense, dramatic personality.

We meet Liz Taylor in middle age, distraught and wailing for a drink after losing the love of her life. She looks back on her journey from early child-stardom in “National Velvet”, through six marriages before the age of thirty-two, a glamorous Hollywood career, a spiral into addiction, cure and relapse.

In this intimate conversational production, Liz Taylor addresses us sometimes as “all of you out there”, but more often as “Michael”. Listening to her memories, we seem to be deputising for Michael Jackson, whom Liz recognised as a kindred spirit, equally damaged by an unhappy childhood and equally ready to use his wealth to escape into “Neverland”. Their strange relationship became legendary after the death of her other soul-mate, Richard Burton. But it seems to be Mike Todd, the father of her children, whose death she’s mourning in her opening lines.

“Sex is what drives us, friendship is what rescues us,” says Liz. We learn that not all her relationships with men were based on sexual love: in the 1980’s the death from AIDS of Rock Hudson helped her to gain fund research into its cure, and she admits that she loved him as her very dear friend, not her lover.

Her long, passionate and mutually destructive relationship with Richard Burton was quite another matter. The harrowing emotional rollercoaster of it, the addiction to alcohol and drugs that accompanied it and her grief at his death brought tears to my eyes.

Claire Malcolmson gives a bravura performance. From the first moment onstage she is alternately spitting contempt and anger, boasting and reliving her many marriages, the fun, the despair and the grief when she lost the men who supported and fed off her talent and beauty. Not that this is a depressing account of Liz Taylor’s chaotic life. Over and over again humour breaks through after the most intense moments, as Taylor proudly gathers her strength up and presses on along the turbulent path that she has chosen.

This woman who was in films as a child actress (“I never had a supporting partner with fewer than four legs till I was sixteen!”), and who felt her life circumscribed by fame, learned to use her power to help others at the last. Sex was a language she mastered, but friendship was what gave her life meaning.

“Sex is Another Language” is showing in the Back Room of the Star in Guildford as part of the Guildford Fringe Festival, from 6th July – powerful theatre – don’t miss it.

I will be embarking on a new show about Marilyn Monroe, with a twist, it would have to be because I’m far too old to play her!

Greensand Band, the Jazz/Swing band I am the vocalist for, has performed a huge amount of gigs this year, all around Surrey and South London.

What a variety of work 2016 and 2017 has brought.  From all this mentioned above to being in the feature film ‘Time for the Season’ directed by Jamie Benyon,  playing an unfaithful, desperate women with no children and only 2 months to live, due to a brain tumour then playing the Dame and villain in the Dick Whittington panto in a couple of weeks; touring South London venues.

Last year I played the wonderful lead part of Leonora in a brand new musical The Mirror Never Lies.  Directed by Joe  and music by Juan Iglesias.  Leonora is a selfish, beautiful, mature woman, who sadly finds she is beginning to lose her power over men, as the inevitable of getting older is starting.

Slowly lyrics for songs in the Hound of the Baskervilles, are being written, this is a long term project.  I want wonderful,  fantastic music to make this into a dark exciting musical.   This will probably take a couple of years but what a great thing to work on.

2016 and 2017  have been extremely busy for me.  Photos above are me performing in my one woman show, just this weekend.  This is a tribute to all the female artists throughout the 20th and now 21st century.  I tour theatres, private venues, functions, parties and hotels. This has now developed into “Broadway meets Jazz”.  The titles describes the content!

Samples of my singing can be heard on http://www.soundcloud.com/clairemalcomson To contact me please email clairemalcomson1@gmail.com or call 07970 219 140.

Last June Enter Stage Right produced ‘Witches and Bitches… and a Couple of Good Girls Too’. Touring a few local theatres in the South East. It is a witty, cynical comic musical revue, with loads of well known, and not so well known songs, and brand new sketches.  Sophisticated, and very attractive, three sophisticated ladies take to the stage and entertain the audience with their tongues in their cheeks, the occasional witch’s hat on their head and the odd feather bower!!  From rich bitches in sequin dresses to haggard witches in ragged stitches! This is a roller coaster of a show, highlighting the versatility of women in all moods of life and love. 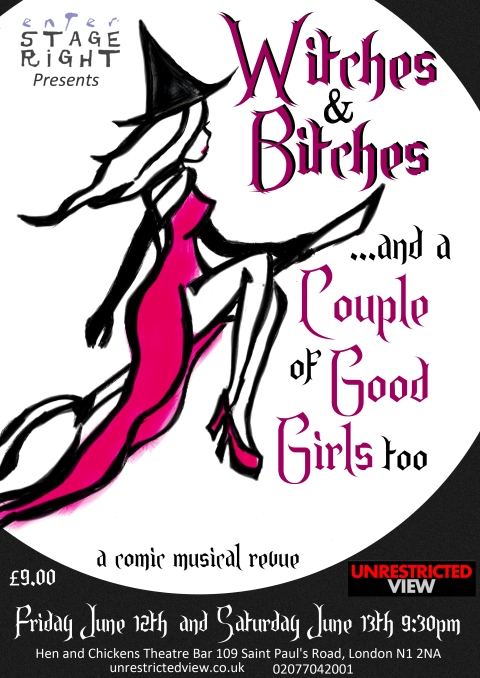 My adaptation of Hound of the Baskervilles published by MXPublishing and produced by my professional theatre company Enter Stage Right,  can be purchased from http://www.mxpublishing.co.uk on Amazon, but you have to put my name in to find it!

In 2013 we produced it touring many well known theatres in the Home Counties, including the Mill at Guildford’s Yvonne Arnaud and the beautiful Hever Castle. I directed, produced it and acted in it.

I was extremely pleased and excited by the audiences’ reactions.  Brian Kirk from the Yvonne Arnaud said ‘The story was brilliantly told with not a spare word, very entertaining, and dramatised in a gripping way.’

At the moment, you can occasionally see me in a funny advert for Casino 777 and in an online advertisement for the Tutor Crowd. For the last few years I have been on the Bauer pharmaceuticals website.

I attended LAMDA on their three year acting course.

I have four children who are growing up very fast.

The last few years have been very exciting for me.  I appeared as the lead in Agnes of God.  Playing the Psychiatrist Dr Martha Livingston (Jane Fonda played her in the 80s film.)  This was hugely challenging as the character stays on throughout the whole play.  Not only is it a thought provoking play but also emotionally personal to most people, questioning the existence of God verses Science.  Fascinating not boring!

I have found myself doing corporate work for the first time and to my surprise find I enjoy it immensely.  I have regularly worked for Lloyds plc as a ‘trainee manager’ training their managers!  My job for Glaxo Smith Kline was extraordinary, as I had to play hostess to all the big supermarket buyers and pretend I was the owner of a 2 million pound house for days at a time.  The challenge was for them to mix with me and socialise and believe I was the owner till the end of the day, which they did.  So all day I was improvising.   I had to do a lot of research about the area where the house was so I could convince them I sent my children to school locally and I knew the shops etc.

At the moment you can see me on the Bayer Pharmaceuticals website acting in their contraceptive advertising.

Not long ago I played the lead singer/actress in Oh What A Lovely War performing all the main songs, at the beautiful Hever Castle, for Kent Repertory Company.

In the last couple of years I’ve collaborated on various drum ‘n’ bass tracks with producer Sust, one of the songs was recently featured on the BBC.  I’ve been highly delighted with the results and my own vocals. I have worked with a jazz pianist formulating a Julie London tribute evening.   Check the audio page of this site to have a listen.  You can also find samples on my SoundCloud

In 2014 I  became the face of Nuttybingo.com.  Not the classiest job I’ve ever done, but great fun.  You can still see me on their TV adverts.

I have appeared in various films and adverts, including being an Activia lady.

Feel free to explore the site as it is building all the time. There are videos, examples of my music, photographs, my CV, and there will be more entries and news to come in the near future.